Few days ago, Nokia Ovi Maps v. 3.04 for mobile was released for public. If you’re following the news, Nokia released Ovi Maps with Free worldwide Walk & Drive navigation last January. And, I have my Ovi Maps on my Nokia 5800 XM upgraded. And I like it. Find more details about Ovi Maps.

Now, I want to share how I use Ovi Map daily use. Right now, I’m in Jakarta and I have been staying in this city for few months. It’s not my first time, but still, I’m not familiar with the streets and routes. I met Ovi Maps when I had my N78 few years ago and found it really useful. But, it was when I stayed in my hometown, Jogjakarta. 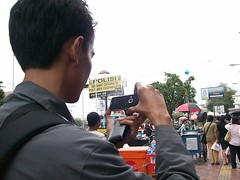 I love taking pictures with mobile device. When I found out that all photos captured using my N78 can have location information, I usually had the GPS information turned on. By this, I can find out where the photos were taken and — the important thing — was that I knew where I stood. How is it useful? A simple example: I went to Solo city and took a picture at the railway station. Then, I went to some places in Solo and took another picture. The result? I could find out what places I visited (with photos).

Okey, that was related to photo. In Jakarta, when I go to a place I usually save the location — based on the GPS data. This is useful since I can also find the navigation, or at least what direction/route I should take from one place to my destination. Usually, when I took bus or taxi — and I’m not familiar with the street route, the first thing I do is firing up my map. Until today, I never lost. :D

Anyway, I rarely notice about the 3D view. But, when I took my time to explore Jakarta in Ovi Maps, I found some buildings/landmarks available in 3D view map. For example: Monumen Nasional (see pictures below).

For more screenshots about some buildings/landmarks I found using Ovi Maps, you can go my Flickr photostream set.

Disclaimer: This is not a sponsored post. I write this based on personal experience.